As South Sudan peace talk is raging, many are waiting to see what change will be unveiled to fix the current higgledy-piggledy. Without doubt, the majority of South Sudanese are yearning for federalism to be the form of governance in South Sudan. Federal system unlike the mere decentralization is a constitutional arrangement in which the sovereignty of the nation is divided between the national and the State governments which provide stronger degree of autonomy to various levels of the government. That include fiscal, administrative and political aspects of governance. Federalism is the best system of governance which we dearly needed. Current decentralization system is only focusing on political autonomy ignoring the administrative and fiscal aspects.

The majority of South Sudanese are seeing the desirable change to be brought by Dr. Riek Machar than anyone else. Due to the fact that, on July 16, 2014, SPLM in opposition under the leadership of Dr. Riek Machar proposed that, South Sudan will be further divided into 21 States, which may include Abyei in the future if border demarcation between Sudan and South Sudan is completed.

Under that proposal, Riek has recommended that former three regions which Sudan divided into ten States in 1997, must be further divided under federal structured system. Upper Nile region that had already been divided to three States comprising of the Upper Nile, Jonglei and Unity, must be further broken into eight (8) States. The new look would compromise Akobo, Bor, Fangak, Fashoda, Northern Upper Nile, Pibor, Unity and Sobat.

Finally, the Equatoria region that has also already been divided into three States consisting of Central, Eastern and Western Equatorias will be divided into six (6) new states comprising of Juba, Kapoeta, Maridi, Torit, Yambio and Yei.

As the proposal remain sitting on the table waiting to be ratified, this author has also come up with a proposal that South Sudan national flag will be changed.

This doesn’t mean that there is anything wrong with our national flag rather it is a thought which I believe would add more sense should we have more states than what we currently got.

In 2004, one brought the same suggestion to the attention of Dr. Riek whether South Sudan National Flag can be redesigned. While conversing with him, Dr. Riek gave me a brief explanation of how current South Sudan flag came about.

According to him “in early 1980s, the leadership of the SPLM/A set down and discussed how the flag will look like. The late chairman, Dr. John Garang, suggested that the flag must bear a star and the star will be placed in the center of the flag. Dr. Riek told the chairman we will face many questions from the world nations who would be curious to know why we put the star in the middle. 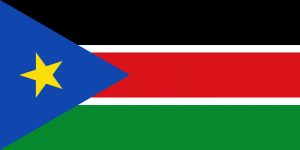 Current Flag of of South Sudan

After the end of their discussion, Dr.Riek was tasked to go along with the design of the new flag. First, Dr. Riek said he called Barnaba Mariel Benjamin in England and requested to be sent pictures of the world flags which Marial did. After Dr. Riek received world flags, he and the team picked Kenya flag to relate our flag with. This is the reason why South Sudan flag is similar to the flag of Kenya except the addition of the blue triangle and the golden star at the hoist. The above is the image of our flag. The description of our current flag, although might already know is as followed. The black color on the top is representing the people, the white color is representing peace, the red is presenting the blood we shed for freedom, the green is the land, blue is the water of the Nile and finally; the golden star is symbolizing the unity of the States of South Sudan.

As previously indicated, I have proposed three different flags to debate upon and pick the one that gives more meaning to our awaited federal republic of South Sudan. Like the original flag was design bearing similarity of Kenya national flag, I design these flags using the Greece and the United States flags as sample.

Based on this image, three bigger stripes on the background, the Black, Red and the Green stood for our three original regions; Equatoria, Bahr El Ghazal and the Upper Nile.

Each region is divided with many white stripes to indicate how many States has been proposed from that particular region. For instance, the black stripe on the top, representing Equatoria. Dr. Riek’s recent proposal stated that Equatoria will consist of six States.

The red bigger stripe is representing Bahr El Ghazal and the proposal indicates that Bahr El Ghazal region will consist of seven States. Last but not least is a bigger green stripe representing the Upper Nile and Dr. Riek indicates that the current Upper Nile region will be divided into eight States. At the end of the green bigger stripe, there is a black stripe which symbolizes the state of Abyei.

Then there are 22 stars in the center of the blue triangle which stood for South Sudan’s proposed 22 states including Abyei. Of course, colors still carrying their original meanings. Black for the people, white stripes are for peace, red for the blood we shed, green for the land, blue for Nile water and golden star for our unity. If the above design does not carry enough meaning to our union national flag, then I made another design below.

Another proposed flag of new federal republic of South Sudan

In this design, there are 11 stripes which are representing our current ten States plus Abyei. Then there are 22 golden Stars representing 21 proposed States plus the state of Abyei if stall unsolved issue turn on our favor. Yet, colors are carrying the same meaning as previously described

The final design below also falls under the same category as the second one. Stripes are intended to represent 22 States including Abyei and Stars are representing 21 proposed States. As roughly described, these three banners are just a proposal, they can be thrown away or something

Another proposed flag of new federal republic of South Sudan

meaningful can be designed base on the idea given. I felt our current national flag is only carrying our image as people, the peace we may have among us or with our neighbors, the blood we shed during our struggle, the land, water and the unity which is representing by the Star. I felt like our three original regions, the current ten States of South Sudan and the newly proposed 21 States should be included in our national flag symbol.

National flags are symbols which represent the value of the nation. Although they are essentially just a piece of colored cloth, yet, they are carrying a very powerful symbolic meaning. I would give you an example to take two papers out of your excersis book, in one page, write down your car, and on the second paper, write down your father and mother names then stomp on one of the two papers. I bet you would easily stomp on the one you wrote your car on. Why is it? I believe your answer would be because the paper that bear your dad and mom names representing their values.

At the same token, national flags are carrying the nation value. Flags are patriotic national symbols, but at the same time individuals feel more proud when they know their value, identity, beliefs and heritages which all are attached to that piece of cloth. I urge the leadership of our democratic movement to look into this proposal and add into it necessary changes that they would like to add. There is no doubt in my mind that South Sudan will be pronounced Federal Republic of South Sudan after we get out from this higgledy-piggledy.