The Ethiopian nationals who reside in Sydney, Australia have celebrated the first 9th Ethiopian Nations, Nationalities and People’s Day  Celebration here in Sydney’s Newington suburb near Olympic Park. It was the first time for Ethiopians to get together and celebrate the peoples day as well as talking about their beloved country. The event what opened by kids, some as young as five years old by singing nation nationality song followed by a speech of the Ethiopian Ambassador to Australia Colonel Negash Legesse Tesfay. 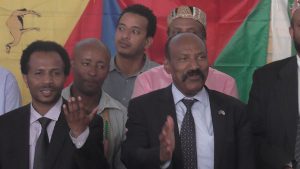 The picture appearing to the left of this text are some Ethiopians who reside in Australia gladly took picture with the Ethiopian Ambassador to Australia Colonel Negash and his team member. Their presence at the event made the occasion very successful telling the audiences how they could be grateful and proud to their country.

A lot of people were very upbeat and determine to form a stronger United Ethiopian community after seeing the flag of their nation being displayed on the wall. Everybody in the room was very much thrilled about the important event which had never happen in Sydney for a very long time.

The ninth regional flags were laid against the wall and it was that setting that made a lot of fun for the people’s day celebration. Before dancing of Ethiopia’s traditional songs began, people were randomly selected and went through a series of questions about Ethiopia.

Some of the question include the makeup of the national flag and what “Green, Yellow and Red” means or symbolise? Other questions include which region of Ethiopia has the town Metu found in or could you point out among those flags on the wall which one it is for the Somale Killil?

Tibitha Nyaluoth from Gambella region was able to answer the question about which Ethiopian region is Metu found and was able to name it as Oromia. However a lady in the hall from Tigrai region who also was standing next to her  disputed it arguing that Metu is found in Gambella.

It was very interesting because not everybody got the question right even if the question may be as simple as which is the capital city of Tigrai? People comes up with many answers and opinions and some said Adwa while others said it is Moyale.

It was a very interesting atmosphere for everyone who made it to the event as well as the parents and their kids. One of the girl who is a five years old asked her dad if this could be done again tomorrow so that she could come again. Her dad replied with a smile, ‘good girl it is a yearly event”.

What made it more enjoyable for kids was that a playground was provided for them where kids who choose not to be in the hall  plays basketball, soccer and Australian football locally known in Australia as “footy”.

When they get bored outside, then they can return to the hall and dance with their parents. Some of the kids who were holding the Ethiopian flags have never been to Ethiopia but gladly were embracing the national flag and proud to be Ethiopians.

The attended were not only Sydney siders. There were visitors from Canada and when they heard about peoples day celebration, they joined in.  One of the lady who comes from Canada said she loves the current government bases on the progress which is taking place now in the country. Almost every ninth region of the country was represented with people from Afar, Gambella, Somale, Harrar as well as Amhara and Tigrai regions.

Here are some of the videos about the event.

More videos of the event will be uploaded soon.

Previous Post Will Salva Kiir still run the country by the presidential Decree if he survives the call to step down?
Next Post South Sudan’s led by a world’s Fool and a Monster