An end of the lineage for so many families

The world had ended for many descendants of Gambella’s Nuer Zone who had lived along the Baro River for centuries in Gambella region of Ethiopia. The cattle rustlers of Murle tribe from South Sudan who have carried out the worst appalling crime in the history of the region had cut short the lives of so many families, the heroic crime ever seen in the region.

The anguish is unbearable and will continue to agonize so many families whose loved ones have been murdered and kids snatched. Its hard to imagine going through that waking up every day with the fact that the deceases are never going to get back to life again and that they would never be able to see their kids for those whose kids were abducted.

While the victims were asleep the bandits opened fire on anyone that they could get. Many children, women and men were killed. The perpetrators looted the cattle and also took the children with them who are 8 years and under.

Its hard to imagine what they will do with the kids who are three months old or younger. A relative of mine lost her life in this attack while her children as well as her nieces and nephews she was raising after the passing away of her sister were also taken in the village of Uret.

Given the number of kids who were kidnapped, it is obvious to see the magnitude of this crime which is by far the heartbreaking tragedy any decent human being can articulate. Because no one would leave his or her child taken at gunpoint, that is why the death is so depth that some entire families were completely wiped out.

We have also seen deaths recorded in Makuey Woreda and some parts of Jokow and Lare which were not initially targeted but came to the rescue of their fellow citizens. So far over 180 people were conformed death and unknown number from the attackers one of which has the image contained in the left of this page. 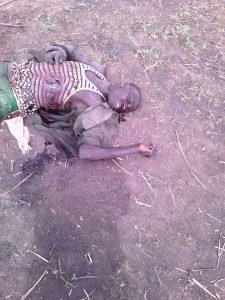